When village water turns salty - the case from Visakhapatnam, India.

In the fishing village of Mangamaripeta, in India’s coastal state of Andhra Pradesh, it used to take five to six hours for the women to get water. There were very few taps and the water quality in the wells that the taps were pulling from was getting salty.

Around 2.4 billion people across the world live within 100 kilometres of the coast, according to a report by the United Nations. As climate change causes sea levels to rise, these communities aren’t just facing the threat of their homes being washed away, the salty ocean water is contaminating freshwater sources further and further inland. Globally, water shortages already affect 1.2 billion people — one fifth of the world’s population — and could affect half of the world’s population by 2030 with climate change making it worse. Women face the brunt of it.

Around 70 percent of people in Mangamaripeta rely on water from borewells that often are contaminated with salt water, according to Arjilli Dasu, of the District Fishermen’s Youth Welfare Association (DFYWA).

Studies show that drinking water with above-average levels of salt water can have dangerous health effects, especially for pregnant women. Researchers in Bangladesh found pregnant women in areas where most sources of water are salty have problems with high blood pressure and are at higher risk of diseases like pre-eclampsia and eclampsia, which can be fatal. 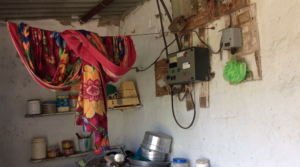 The switch for the electric water pump, and often the water that the pump gives is salty. Photo by: Manon Verchot ;

“Drinking water salinity problems are expected to be exacerbated in the future, putting millions of coastal people—including pregnant women—at increased risk of hypertension and associated diseases” the study found.

“There is an urgent need to further explore the health risks associated to this understudied environmental health problem and feasibility of possible adaptation strategies.”

Villagers in Mangamaripeta also say they’ve faced health problems related to salt water. Some say using salt-contaminated water for day-to-day activities like washing clothes and dishes results in skin irritation. The community faces more water problems in summer. During the rainy season, freshwater replenishes the groundwater where the village gets its water from. In summer there’s no inflow to replenish the wells and the water pressure drops while the quality becomes saltier.

Two years ago, many villagers in Mangamaripeta turned to bottled water for cooking and drinking, but not all families could afford it. Most families depend on fishing, and in the last years fish shoals have become sparse. Experts attribute the worsening fishing conditions to pollution and climate change. This is hurting the community’s ability to sustain itself and pay for clean water.

Water-related tasks like cleaning and fetching water fall to women and girls in Mangamaripeta. Children are also asked to help fetch water. And that can affect their schooling, according to G Ratna, one of the women in Mangamaripeta.

“When women are going to collect water, in some areas, men are sitting there. It makes women uncomfortable,” says Ratna. “When we are filling water, some are wearing saris, others may go in nightgowns. We have to carry pots of water across the road, so what do we pay attention to, the traffic or the men staring at us?”

Every year, women are caught in 10 to 15 road accidents because they have to cross a four-lane highway to reach one of the main taps, according to Dasu. No one has died, but three or four of the accidents resulted in bone fractures, and minor injuries.

A bumpy road ahead

DFYWA started working with Mangamaripeta 15 years ago, according to Dasu. The association encouraged the community to begin voicing their problems to local government representatives by teaching the community what rights they had. Over time, village representatives began to listen, and started looking for solutions for the community, Dasu says. Five to six years ago, this wasn’t the case. According to Dasu, any time the community wanted the panchayat to release water, they thought they had to give the panchayat some money. The panchayat enforced this belief by sometimes refusing to release water unless they were paid. Now things have changed, thanks to the help from Dasu and his team. The community is now aware that they don’t have to pay to get the water they’re entitled to. So they no longer fold under pressure. Dasu says cases where the community pays to get water have dropped significantly. 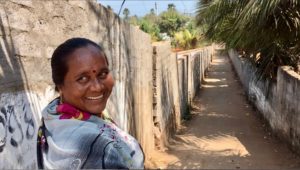 Inhabitant of the village interviewed by the author. Photo by Manon Verchot ;

With the help of Dasu’s District Fishermen’s Youth Welfare Association (DFYWA), things have gotten better for women and children.

DFYWA has encouraged the community, especially the women, to advocate for their rights. Now the women know that they can approach their village representatives, and the representatives are obligated to relay the information to the concerned authority.

In the last five to six years, this has worked well for Mangamaripeta. The village council however does not have any women representatives.
“We used to spend all our time water towards water,” says Ratna. “Now it’s not that bad. One, one and a half hours we spend now.” “They [village representatives] fear that if they don’t [help us], then the people won’t support them in elections,” she adds. Across the globe, eight out of ten households that collect water rely on women to take care of the work, according to the the Tata-Cornell Institute. Despite the gender imbalance in the labour, policies on water and land management are usually not made with women in mind. In the last few years the village council in Mangamaripeta has managed to set up more taps so for every 10 households there are two to three taps available. It’s a lot easier for women now. The water doesn’t run all day, but it comes at times set by the local village council known as the panchayat. The panchayat has two women representatives.

“Some women also request the panchayat (village council) not to give water at certain times, says Ratna. “So that they can fill it before they leave for work. Because everyone has work to go to these days.” Children are also asked to help fetch water. And that can affect their schooling, according to Ratna. “Kids get late [to school sometimes], so they tell the teacher,” she says. “If the water supply comes during school time, some kids go to school without getting water, others who need it first fill water, then go to school.”

Working Towards A More Stable Future

Dasu and his team have focused on empowering women in the community. Because fishing is becoming a bigger challenge, many of the men migrate for work, leaving the women to take care of things at home. In many cases, Dasu says, this means the women have to take on additional financial burdens.
So DFYWA is working on projects to help bolster employment for the community, with a focus on women, according to Dasu. One of those projects was to get the community a truck that transports fish with support from the District Administration through Department Of Fisheries. In the future, they want to create a solar fish drying unit, seafood curry points and tuna processing unit to create more jobs in Mangamaripeta. DFYWA also helped the community develop proposals for a Reverse Osmosis (RO) plant to filter water. 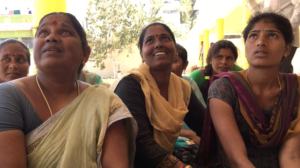 Women say though the water situation is still tough, it’s better since they started putting pressure on the government. Photo by Manon Verchot

If the plan for an RO plant is successful, Dasu says they will create a committee of women to oversee water distribution to the village. He says women are better at ensuring equal water distribution across the community than men. But even with this plan in mind, it’s difficult to say if it will materialise anytime soon, adds Dasu.

At the state level, the government also made promises to help villages get water. In January 2018, the chief minister promised that by 2021, all households would get drinking water.

When women are forced to carry the burden of fetching water, they’re prevented from working on other avenues of generating revenue for their family, according to Water.org. A study from the Institute of Home Economics at the University of Delhi further found that women push aside education and skill development opportunities because of water-related issues.

“If there are RO plants, it’ll make it easier for people,” says Dasu. “It can even be provided for free. The government can provide it.”