Home » The role of women in Kenya’s rural water sector: WIN in conversation with Caritas Switzerland 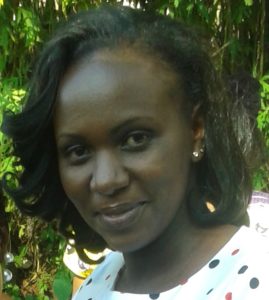 WIN is in conversation with Catherine Wanjihia from Caritas Switzerland.

Catherine is a civil engineer with professional experience in the water sector since 2004. She joined the Kenya programme of Caritas Switzerland in 2011, to work at the field level. She started by interacting in particular with women on a one-to-one basis and learned their local language, as most of them did not speak English. This gave Catherine the opportunity to build a close relationship with them and get a deeper understanding of their role and responsibilities in the water sector and the socio-economic context.

Caritas Switzerland has been successfully training community groups in rural areas to manage their water systems by using the Integrity Management (IM) Toolbox since 2014. The organization further supports women with training on hygiene and sanitation.

Can you take us through the daily lives of women providing water at the village level in Kenya?

Simply put – provision of water at household level is the sole responsibility of women and young girls. At the village level, they have to make sure that there is water at home and for animals. They need to allocate enough time for fetching water depending on the distance, which might take up to 8 hours per day.  Therefore, if the villages are in dry areas, women might need the entire day to collect water. Transportation of water is done manually and for those who are lucky, donkeys are used.

Women also play an important role in creating the local water infrastructure.  In Kericho County, the tanks are constructed by women. Women generally support all construction work including tanks, kiosks, protection of water sources such as streams and springs, pipeline excavation, and provision of water (water for mixing cement). Where unskilled labor participation is required from the community, one third is contributed by women.

What are the key challenges they face and how vulnerable are they as women?

In the Northern region (arid and semi-Arid land) and some part of the Rift valley of Kenya, which is dry, women must wake up at 5:00 am to get water, which means they have to walk in darkness. At the water source, men who arrive later will still demand to take water before the women, because they feel privileged.  If a women needs help to transport water, using a donkey for example, the  men that  help her will demand payment, sometimes even in the form of sexual intercourse. In Kericho county there are few known cases of such kinds of harassment as most of the water collection points are run by women.

Water collected from natural sources is free of charge unlike water sourced from piped systems or water kiosks. Woman have to ensure money is set aside for water and in most cases they depend on their husbands for the same. In almost all homes, they grow kitchen gardens and ensure they are watered during dry spells.

Can you tell us about Water Management Committees and the role they play in the gender and integrity narrative?

Most of the Water Management Committees are registered as self-help groups with the department of social services under the County Governments. As such, it is required that one third of members be women. To fulfil this requirement, women are often given token membership. They rarely make major contributions since the culture does not allow them to disagree with men or to contribute to the discussions. There were instances where women are present in the same meeting but facing different directions away from men.

The situation is evolving and one third of elective positions are now reserved for women according to the Constitution (2010). We see more instances of women being elected into a leadership position. Some are chief, chairpersons, treasurers and vice chairpersons. Most community groups are sensitive in terms of gender representation.

Do take us through the Integrity Management (IM) Toolbox for Small Water Supply Systems and what role have women played in this.

The IM toolbox guides community groups to improve the performance and compliance of water systems, by putting in place better management and governance practices and improving functionality. The impelmentation of the IM toolbox is a long-term process and can take between 6 and 9 months depending on the coaching needs of the community and on how well the community is organized and performing. It is called a toolbox because it contains a broad set of tools to select from depending on the problems to address. The IM Toolbox trainings typically go through 3 different phases: preparation phase, integrity management workshop and the implementation phase. 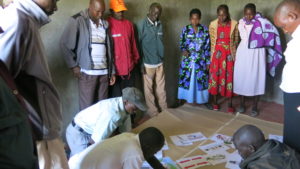 With the IM toolbox being put to use, the tide has slowly but certainly begun to shift in terms of gender.  To give one example, during the early IM toolbox training workshops, men and women would sit on different sides and women generally did not speak up. In order to change these dynamics, we made each group i.e. men and women gather separately first for discussions, after which they would come together and present the main highlights from their discussions.  We noticed how much more women spoke up and how men increasingly gave women a chance to express their opinions, and  accepted their ideas.

It also increasingly emerged that women are trusted more than men in terms of group finance management hence most committees have women as treasurers. Men have also changed their attitude towards women and are more open to them serving in different positions in the management committee, which were formerly branded as “men positions”.

After the workshops and follow-up trainings, the committees have been setting up book-keeping systems, opening bank accounts, and validating the constitution of the committees, just to name a few measures. All these have led to proper management of the water systems, which has directly impacted women by making their daily life easier and enabling them to engage in other economic and social activities.  It has also given women to strengthen their voice by participating in the management and taking leadership positions in the committee.

Has involving women through the IM toolbox brought other changes in the gender dynamics and socio-economic standing of women?

The IM Toolbox – apart from transparency and accountability –  has also introduced participation as a key component in management. During these participatory meetings, women are vocal because they have realized water issues affecting them directly. This has changed the dynamics of decision-making.

In Kericho, I facilitated two to three IM toolbox workshops. In each group, a leader is usually appointed, called “chief”. In one of the three workshop groups it was a woman. It is very positive and heartening. Even for the higher positions, women are now more often elected and hired, something we would have never dreamt of.

Going to higher administration levels, women are getting jobs and governing positions in the department of water or other levels of government. When women hold governing positions, they tend to have a more women-oriented approach, and in terms of allocating resources they are thinking more about women. For example, the Deputy Governor in Kericho County is a woman. Through the IM Toolbox groups that we have trained, we have given her the names of the 70 women involved in the process. She intends to take these women through entrepreneurship courses so that they can become economically independent. These women are not the same women she was dealing with one to three years ago; these are women are expanding their thinking and horizons, and are looking for what they have can do for themselves and for their families.

What more needs to be done and what are the opportunities?

We have a long way to go in improving the social role, norms, culture and acceptability associated with women and to see the changes where they have a prominent role to play in making decisions. The main challenge for them is the lack of economic independence and empowerment. Women that are empowered and with potential capacity are reluctant to push the envelope because of societal norms. If you look at job opportunities outside villages, most are going to men because women are unable to leave the children and house responsibilities to take work far away from their family. Moreover, men will not agree to stay at home, and women feel it is not what they are supposed to do. A woman is neither encouraged, enabled nor easily allowed to take up a job because it means that she will leave behind her role as a woman in the family, and the family and children will suffer. Therefore, even if there were an opportunity, women would think twice through advantages and disadvantages of leaving the children. Education can make the situation change – education increases chances of getting a job, seeing other perspectives, “another” world and a life beyond the traditional and constricted roles of women.  The biggest opportunity on hand is empowering women financially, supporting them by building their confidence and encouraging them to speak up.

Where are the Women? Equal representation of men and women is essential in WASH sector

Sex for Water: WIN in conversation with ANEW