The story from Zambia on how local socio-cultural norms influence transparency, accountability, and participation in the water sector

Home » Whose Job Is It to Fetch Water?

Me: “Why is collecting water a woman’s job?”

Male villager: Says with a grin, “Because it has always been! In our tradition men and women have been assigned specific (household) duties”

In the village of Kapau, Zambia, fetching water has always been the task of women (and children). This is a deeply ingrained cultural institution or norm. Institutions –not to be confused with ‘organisations’ – are understood as ‘rules in use’ in a place. It is these institutions that affect how interventions are made to improve water access. Water access in this context is defined as people’s ability to derive benefits from water, according to a definition of access by Ribot & Peluso (2003).

World Bank’s The Rising Tide report (2017) says that water-related norms “serve to assert status and power and reinforce established hierarchies”. Norms therefore have to be carefully taken into account, especially in terms of gender, in the design and implementation of any intervention to improve water access.

Generally, new water infrastructure such as a borewell, pump, pipes, taps etc. is installed to reduce the burden of the water fetcher, but local norms can counter-intuitively affect that purpose, as we illustrate with the example of Kapau, which also shows us that water access has as much to do with governance as it has to do with infrastructure.

This blog is a summary of seven months of research conducted both in Zambia and the Netherlands as a part of a post-graduate programme with IHE Delft funded by the Coca Cola foundation and the European Union’s Horizon 2020 Research and Innovation Programme.

Through this research, it can be asserted that the socio-cultural norms of a place greatly influence the pillars of integrity: transparency, accountability, participation:

a) by affecting what people wish to or are allowed to say;

b) by affecting which complaints are acceptable and;

c) by affecting who is allowed to speak or take.

A new borewell for Kapau: the interplay between water integrity and norms

Kapau is a remote village in the Western Province, Zambia, with a population of almost 1300 people. The people here are so poor that they barter maize for everyday products within the village, and not many use currency notes unless required. The village has no formal electricity or telephone connection. People who live here are from the Lozi tribe and have distinct cultural practices. The region is known for its periodic rivers and shallow water pans amidst the extended Kalahari sand dunes. The water table is shallow and water is relatively easy to reach but water access is still an issue.

The Ministry of Local Government and Housing’s Department of Infrastructure and Support Services (DISS) has been subsidising the construction of borewells under the National Rural Water Supply and Sanitation Programme (NRWSS), funded by the African Development Bank (AfDB). The NRWSS Program is being implemented by involving stakeholders to increase the water supply network and reduce walking distance for women and children. The village in need of the wells must apply in writing to the authority concerned. The local authority validates the application, checking during a field visit whether the situation is dire enough for the construction of a subsidised borewell. Once the situation has been confirmed and the application fee is paid, the construction order is sanctioned and the borewell gets constructed for the villagers.

When the water point used to be relatively far, both men and women would fetch water with an ox-cart. When Kapau received its borewell, and the water point became closer, the water fetching activity became ‘trivial’, and was fully delegated to women and children.

This activity, though ‘trivialised’, still takes five hours in the day of many women (and children), and requires significant effort: lifting  20 litre buckets and walking in the hot, sometimes thorny, Kalahari sand. 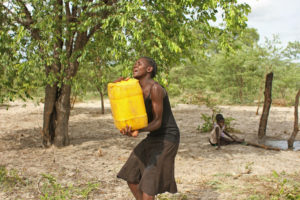 The ‘last mile’ of water service delivery strongly depends on local norms, which establish how chores are managed and distributed.

Religion can play a role in how these norms are set in stone. In an interview, the pastor in Kapau pronounced that their faith instituted delegation of chores. He said, “man is the head of the house. And our faith has assigned certain roles for my wife and for me”.

Other cultural practices and traditions also influence water-related norms. For example, the payment of a bride-price. Many in Kapau have come to understand that once money is paid to a woman’s parents before getting married, the woman will do all the house chores. At kitchen parties, which are like bachelorette parties hosted for the bride, older women teach the bride-to-be how to perform household chores gracefully. Complaints about the chores or body pain can lead to divorce. Many are therefore afraid of voicing pain and sometimes also accept it as it their ‘duty’.

How norms are perceived and experienced, differs greatly. Older women, new mothers, young men, and children will sense the distance to the water point differently. At the village borewell, many interviewed children claimed to detest water fetching, saying it is a painful ordeal. But some children, especially girls, love their job. They feel the act is satisfying as they feel good helping their mothers. Some of them leave early from school just so that they can fetch the required number of buckets.

Norms affect participation in village meetings convened by the village chief also known as the Induna.  Both men and women attend these meetings, although mothers caring for small children are often held back by their household duties and find it difficult to attend. There are instances where older children share domestic tasks and make it easier for women to attend. There are also exceptions. A few individuals have deviated from gender norms. Well-educated English speaking women, older women, the wife of an influential man, were all more vocal in the meetings.

This attendance by both men and women does not mean, however, that issues are given equal representation. What constitutes a valid issue to be voiced, and who voices it, is deeply impacted by local norms.

During interviews carried out in the village, body ‘pain’ or ‘distance’ were acknowledged as issues mostly by women and few men, but were not considered worthy enough to be voiced at meetings. Most people interviewed (including women) echoed this statement: “it’s a woman’s job, and it is part and parcel of life”. Some women complained that the men did not allow them to speak. A few elder women said “younger women do not have ideas, hence they choose to remain quiet”. These patronizing regulations affect meaningful participation.

The research highlights that new infrastructure alone does not necessarily reduce the burden of fetching water on women and children. Cultural norms are important, they reinstate people’s sense of belonging to the place, and they are valued and respected. In terms of gender, their impact on how water sector interventions are carried out and their results is considerable.

An important take-away is that support programs such as the NRWSS should not only inform themselves well on cultural norms that affect women and marginalised communities, but also stock-take on how water access creates a shift in power dynamics within the accepted hierarchies.

In this situation, it is imperative as a first step, to foster more inter and intra village interaction. Researchers from LSE, Fujiwara et al. (2014) have published a report which states that when people engage in sports, the likelihood of volunteering rises by 3% while through arts it is 7%. With more platforms to engage discussion increases among different groups of people.

In Kapau for example, although not all women spoke in formal village meetings, later the same group would congregate and discuss in someone’s private courtyard. Enabling such intermediaries and informal spaces to facilitate exchange, allows the ‘issues’ (which were otherwise considered trivial) to get acknowledged, and thereby be voiced in public forums later.

Interactive cultural events, local sports competitions, especially during the festivals, provide an opportunity to navigate through the cultural norms in place and voice out the issues in regards to access to water. These activities therefore support the promotion of integrity pillars, transparency, accountability and participation (TAP).

Neha Mungekar is a water manager, urban designer and a documentary photographer from India. This blog is based on her MSc research “Whose job is it to fetch water?” – Understanding the role of gender in access to water for domestic use in Kapau, Zambia at IHE Delft, Netherlands. This research was conducted in connection with the project “Women and Water for Change in Communities”. The project aims to promote the inclusion of women in water-related decision making and strengthen the role of women as sustainability change agents in rural African communities. Action Research activities conducted at three sites in Zambia, Tanzania and Uganda aim to improve our understanding of what ‘empowerment’ truly means, and how it can be meaningfully supported by development partners. All activities were made possible by support from The Coca-Cola Foundation (Community Grant IG-2016-1764) and the European Union’s Horizon 2020 Research and Innovation Programme (Grant No. 689744).