A contribution from the Water and Open Government Community of Practice

Home » Innovations in water management in the city of São Paulo: the leading role of civil society

The Metropolitan Region of São Paulo faced a grave water crisis from 2014 to 2016. Despite the gravity of the situation, the political leadership of Brazil’s largest city remained mostly silent about how to address it. Seeing no one take action, Alliance for Water broke the status quo by asking a simple question: What exactly are the real responsibilities of Brazilian municipalities in the complex and multi-sectoral management of water?

In practice, the answer was surprisingly not clear. The question has since become the baseline for new initiatives and innovations in campaigning for water sector reform.

About the Alliance for Water

Founded in October 2014, the Alliance for Water is a civil society movement that came together to tackle the water crisis in São Paulo and to build a “New Culture of Care for Water” in Brazil. The Alliance is comprised of a wide and diverse group of over 60 organizations and movements focused on the environment, consumer rights, human rights, education, activism, and innovation.

From legal review to campaign for reform

During the water crisis, the Alliance witnessed a lack of transparency in the management of water resources. It became clear that this directly influenced the population’s perception of the crisis and made it more difficult to engage citizens to tackle the issue.

Under the coordination of Estela Neves, Professor of the Graduate Program in Public Policies at the Federal University of Rio de Janeiro (UFRJ, (Portuguese acronym), members of the Alliance collaborated with the Institute of Democracy and Sustainability (IDS), to conduct an extensive review of the Federal Constitution of 1988 and the Brazilian legal-regulatory framework and map all the responsibilities of cities for water management. The resulting report, “Who cares for water? Fresh water governance: the national legal-institutional framework”, was published in 2016.

This technical document formed the basis of a campaign called #VoteForWater, initiated by the alliance. The campaign successfully transformed the findings from the research into a draft bill, which was applicable to any municipality in Brazil. This text was conceived under the aegis of the Water Security concept, as defined by UN-Water. The draft bill was conceived as a single legal instrument that did not create any new responsibilities but helped to ensure that local governments could be held accountable for the actions they already officially have the responsibility for. It was meant as a useful instrument to inform as well as put pressure on candidates campaigning during the municipal elections in 2016.

As a result of the campaign, over 300 organizations, which had the commitment from 82 candidates for Congress and 18 candidates for the Executive branch across Brazil in 47 municipalities, signed a declaration to take the draft bill forward. Of these candidates, two mayors in the municipalities of Itu and Marabá and five city council members in São Paulo were elected. The technical and political result of this process was the development of a document that provided a framework for municipal water security on seven fronts, illustrated in the image below. 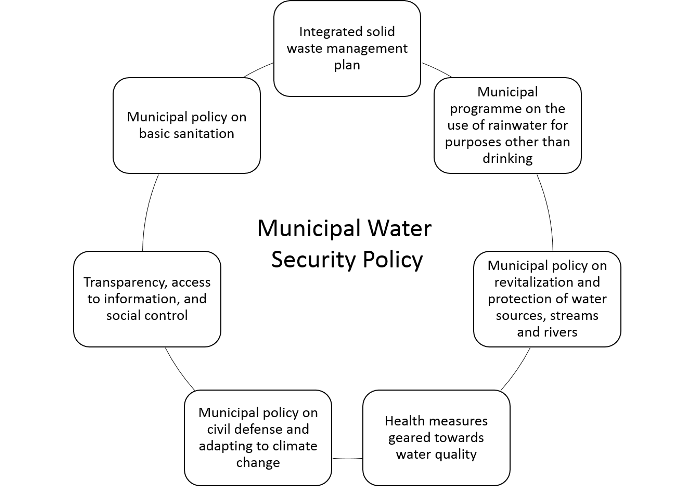 Transparency, the access to information, and social control mechanisms are fundamental dimensions of the Municipal Water Safety Policy, as laid out in item VI, paragraph two, article 2.

In the city of São Paulo, the largest city in Brazil, the draft bill actually advanced. After it was presented in the local parliament, the declaration became a bill in December 2016. It was named PL No. 575 and was authored by city council member Eduardo Suplicy from the Labour Party, with the support of representatives[1] from several other parties. It was approved during a second debate in the Municipal Council on May 8, 2019, and enacted on May 31 of the same year through Law No. 17,104, which created the Municipal Policy for Water Security and Water Management (PMSH, Portuguese acronym).

There are two important provisions in the law:

This innovative public policy places the spotlight on Water Security actions and policies at the local level and pushes the agenda as political priority. Two major challenges in the São Paulo’s case, in order for the policy to really take effect is a) the creation of the specific body inside the government to articulate and integrate local action, and b) to build a set of indicators that can be  used as a powerful instrument for monitoring,  improving  public policy and wider communication with the society and the citizens.

To make inroads for the implementation of the PMSH, Mayor Bruno Covas from the Social Democratic Party of Brazil (PSDB) signed a Directive (No. 349) on June 25, constituting the Water Security Commission. The Commission members include six municipal government departments, two representatives of civil society[2] and one representative from academia. It has two main tasks: drafting a proposal for setting up a specific body to exercise the responsibilities laid out in article 2, and drafting a proposal for collaborative monitoring and improvement of indicators. The indicators to be considered include, for instance, local water stress index and the historic evolution of data on hospitalization due to waterborne diseases.

This effort in São Paulo is the fruit of a technical process resulting from a partnership with academia, followed by mobilization of the electorate with the active participation of multiple civil society actors, with the backing of different political parties; the legislature and the executive branch of the São Paulo municipality.

Through the Open Government Partnership lens

This co-created effort is part of an open government and social participation logic that, among other elements, seeks to better monitor the implementation of the new law –and related challenges- with strong indicators. Indicators feature elements from the seven themes that formed the basis for the law. The indicators emerged from a process that was based on a dialogue with civil society. The Alliance for Water played a fundamental role in providing technical support and social mobilization in the process.

Considering the lessons learned from Brazil’s water crisis, especially the São Paulo case, transparency should be one of the key components of the process of implementing the law instrumental in promoting social control and quality participation.

São Paulo has a lot to share with the Open Government Partnership (OGP) Local Program, as it relates to the pillars of transparency, participation, co-creation and accountability, and to open government reforms in public services. Future commitments on water resources in the city of São Paulo’s action plan will hopefully build further on this Alliance for Water experience.

Guilherme Checco holds a Master’s degree in Environmental Science from the Institute of Energy and the Environment at the University of São Paulo (Procam/IEE/USP, Portuguese acronyms) and a Bachelor’s degree in International Relations from the Pontifical Catholic University of São Paulo (PUC/SP, Portuguese acronym). He is currently a researcher at the Institute of Democracy and Sustainability (IDS).

Marussia Whately is an architect and urban designer, specialist in water and sanitation. She is one of the leading people behind the Alliance for Water. She is an author of several books and publications, among them “Século da Escassez. Uma nova cultura de cuidado com a água: impasses e desafios.  She currently serves as the executive director of the Water and Sanitation Institute.

More on the Community of Practice on Water and Open Government

The Community of Practice on Water and Open Government is a collaborative space for stakeholders to share ideas and expertise to support open government reforms for water. It is run by Fundación Avina, the Open Government Partnership, Stockholm International Water Institute (SIWI), Water Integrity Network (WIN), and the World Resources Institute (WRI) since 2017.

Find out more at: