Opening up data on water resources

This blog was written by Cartocritica, as a contribution to the Community of Practice on Water and Open Government.

Access to water is a right that affects various aspects of life: environmental, social and political. It is essential for the conservation of biodiversity, to maintain hygiene, and to support health and livelihoods.

In Mexico, water is considered the property of the nation and the government is responsible for guaranteeing the right to its access, its availability in sufficient quantity and quality, and access to safe sanitation. However, what can be seen in Mexico is desiccated landscapes, polluted aquifers, and communities that lack water access. Even in cases where water is available, quantity and quality are often inadequate. Much water is lost or polluted by excessive toxic discharge, large concessions for industries, and irregular system operation.

When one tries to review official data on volumes of water available, extracted, licensed under a concession, or polluted, it becomes clear that there is little or no information available, and that most of what is available is in restricted access.

Such opacity prevents interested users, especially territory and human rights defenders, from accessing key information that would allow them to know what the state of water resources is in their localities or to promote citizen participation in water management.

This is why more transparency and accountability in the water sector are urgently needed. Incorporating water-related commitments in the Open Government Partnership (OGP) process is a means to address this and enable dialogue between government and civil society.

Its principal line of action was described as:

To act on the commitment, the National Water Commission (Conagua) launched a website where documents on water quality were published, although not in line with the original objective (see evaluations on compliance with third plan here and here) and only till early 2018. Documents were then replaced by a link to a web platform featuring a real-time map of installed water meters in the country,  including information on volume extracted at each measurement point, but not on the volume of granted concessions or of discharges. However, the option for downloading open data was difficult to use and the platform ceased to be updated in March 2019.

Mistrust between stakeholders leads to the interruption of work on commitments

Unfortunately, the implementation and monitoring of the commitments made in the third Plan were interrupted in May 2017, following allegations of espionage directed at journalists and human rights defenders, some of whom were active participants in the OGP process. The Núcleo de Organizaciones de la Sociedad Civil (Nucleus of Civil Society Organisations, NOSC) then decided to withdraw from the OGP coordination board, known as the Tripartite Technical Secretariat (STT), on the grounds that there was a lack of trust and no enabling environment for the promotion of dialogue needed to continue the process. The government tried to get support from new CSOs to continue with the implementation of the third Action Plan but did not succeed.

In mid-2018, presidential elections were held in Mexico. The opposition won the election, taking power at the end of that year. In this new scenario, the OGP process was resumed in 2019, with the publication of the fourth National OGP Action Plan on December 10th, 2019.

Preparing a fourth National Action Plan with a commitment for water

Following the transition process into the new administration, the Ministry of Public Administration contacted members of civil society and academia (including UNAM, CartoCrítica, Agua para Todos) to review the most relevant issues on their agendas and consider them for future commitments. At that time, transparency and accountability in natural resources management had not shown many signs of improvement. Several civil society organisations were thus making efforts to promote access to natural resource data.

During this new round of meetings, CSOs pointed out that the situation in Mexico was characterised by over-exploitation and pollution of aquifers, vulnerable communities having little access to drinking water, a lack of transparency regarding the volume of granted concessions and of real extraction, and a lack of information on fees paid by private entities and by the real beneficiaries of those concessions.

Around the time of the meetings, a group of CSOs (Causa Natura, Reforestamos Mexico, the Fund for Environmental Communication and Education, and CartoCrítica) were already working on the design of a Natural Resources Transparency Index (ITRN in Spanish), a tool to measure transparency of public information regarding the management of forests, water, and fishing resources. In this work, recommendations were made for the development of commitments on open government.

Proposals were then made to develop a commitment for water resources, to be integrated in Mexico’s fourth National Action Plan (2019 – 2021). The commitment would identify areas of opportunity to promote openness and dissemination of information in efforts to achieve SDGs (6, 14, 15 and 16), with the joint participation of three parties – government, civil society and the National Institute of Transparency, Access to Information and Personal Data Protection (INAI). An OGP Coordinating Committee replaced the STT and promoted meetings with the CSOs developing the ITRN, as well as with the government entities involved in natural resource management. In the water sector, these were Conagua and Semarnat (Ministry of the Environment).

The meetings resulted in an agreement to include the Index in the fourth OGP National Action Plan, under commitment number 10: Strengthening transparency in forest, water, and fisheries management. The commitment covers two main developments: the implementation of recommendations from the transparency assessments carried out through the ITRN, and the creation of a participatory mechanism called Transparency Monitoring Groups (Grupos de Monitoreo de la Transparencia), to follow up on the progress of this commitment.

The ITRN involves an analysis of transparency in the forestry, water, and fisheries sectors, through indicators for three types of data -categorised as active (required by law), proactive (voluntary, useful and available online) and reactive (requested). The ITRN examines these in three axes, or areas, of resource management: 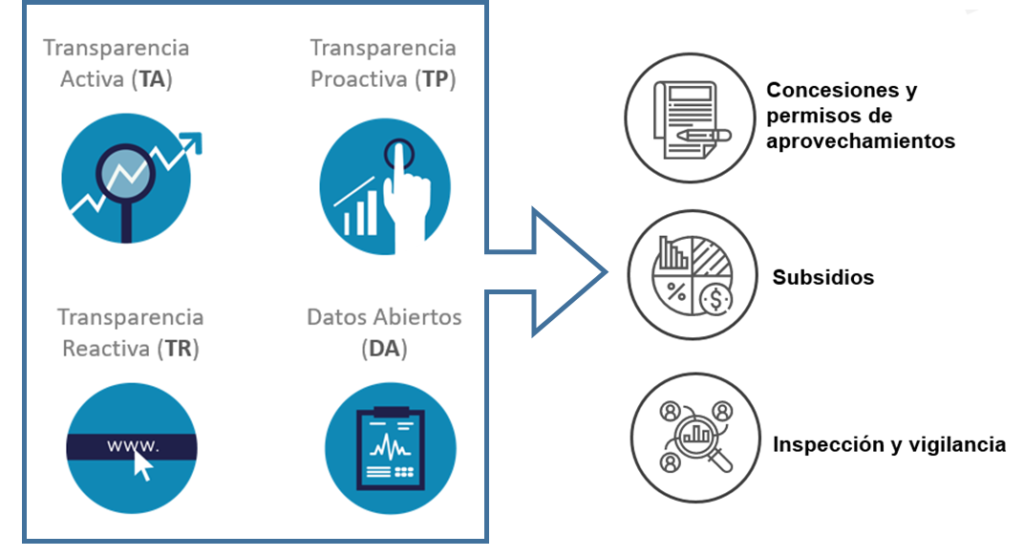 The indicators are assessed based on a set of variables (required data) according to their availability and usefulness. A set of variables (and their components) is foreseen for each data or transparency category (Active, Proactive, and Reactive), in each area of management (concessions and permits / subsidies / inspection and surveillance). In order to identify these variables, both officials and users from each sector were involved. Vulnerable groups with direct links to the resources, who are defenders of territories and the main users of the data, in particular women, indigenous peoples and small-scale producers, were also involved in this process.

To date, the variables identified are in the process of being evaluated. For example, one of the variables identified in the Active Transparency category and related to permits and concessions is: information on concessions for the exploitation and use of national surface waters. This variable is broken down into various components such as type of use, concession volume, validity period and location of the authorised point of extraction. A value of 1 is assigned to the variable if the components are available online, 0.5 if incomplete, and 0 if not available.

With the results obtained, specific recommendations will be made for each sector to improve transparency and information access. The commitment made in the OGP Action Plan is to implement these recommendations.

Moving forward with the new commitment

A roadmap was developed to ensure implementation and follow-up of the commitment. This roadmap contains key actions that make it possible to identify the state of the commitment process at any point in time. The creation of the Monitoring Groups is a milestone in this process. These groups are public, inclusive, and have an open follow-up mechanism. They include participants who are also decision makers, and who verify and ensure that recommendations are implemented. They also provide feedback for the future, including new needs, new participants, and new commitments to be monitored.

In the ongoing ITRN assessment of variables related to water resources, several issues have already been identified in terms of transparency and accountability. There is for example too little updated data on quality, extraction volumes granted and effectively withdrawn, and availability of environmental flows.

After this first assessment, it is expected that not only will the information gaps identified be filled and that data will be made available in official websites in a timely and reliable manner and in open formats, but also that this data will be usable by different stakeholders: for a researcher studying the behaviour of a basin as well as for users defending their territories, and their rights.